Tappan Zee Constructors is a quad venture - between Fluor Enterprises, Granite Construction, Traylor Brothers Construction and the American Bridge Company - that was hired to design and build the New New York Bridge Project, which (at the time, was) the largest bridge and highway infrastructure project in North America. The project was started in January of 2013 and, after a phased opening that started in 2017, the final south travelling lanes were opened in September of 2018. Deconstruction work on the old bridge continues.

A new landmark in the making

Since 1955, the iconic Tappan Zee bridge has been a critical thoroughfare for New Yorkers commuting between Rockland and Westchester Counties, located 20 miles north of Manhattan and across the Hudson River from each other. However, a heavy increase in traffic ultimately lead to the decision to replace the historic bridge. The New New York bridge, named the Governor Mario M. Cuomo Bridge, is designed to meet the needs of the growing community while supporting cultural and economic growth. As the longest and most complex crossing in the New York State Thruway system, the new New York bridge will also have the ability to support more lanes and a pedestrian and bicycle path. In 2013, Tappan Zee Constructors, a quad venture between Fluor Enterprises, Granite Construction, Traylor Brothers Construction and the American Bridge Company , was hired to design and build the new NY Bridge. The north span of the bridge officially opened to westbound traffic in September 2017 and a month later it was opened to eastbound traffic. Tappan Zee Constructors then began deconstructing the old bridge - work that continues in 2019. The south span of the bridge was opened in September 2018. The new structure is already a landmark, featuring a 3.1- mile twin span cable-stayed structure. The bridge’s angled main span towers make it visually striking from all angles. It includes eight general traffic lanes, four emergency lanes, a bike and pedestrian path and state-of-the-art traffic monitoring systems. Also unique is that the bridge has been designed and constructed to be mass-transit ready and can accommodate bus rapid transit, light rail or commuter rail.

Overcoming marine and other environmental challenges

When it began in 2013, the new New York bridge was the largest infrastructure project in the US and it required careful design and planning throughout all phases.

The final phase of the project involved the careful deconstruction and removal of debris from the old bridge. Making the deconstruction phase more difficult was the accelerated schedule for the project, the sheer size of the bridge, variable water depths of the Hudson River below, and windy conditions. The flow of the Hudson river, wide tide ranges, and lack of water clarity and visibility were also major issues. Tappan Zee Constructors consulted with Lou Nash, President of Measutronics Corporation, the Measutronics team and Trimble to overcome these challenges. The positioning and guidance systems used included Trimble and Teledyne components – Trimble software, hardware, and sensors for positioning, guidance and tracking of machines, and Teledyne marine imaging sonar for subsurface applications. Measutronics installed and calibrated the equipment and installed the systems and all the sensors. Once the system was calibrated, Meastronics was able to check against the survey and start training the operators on how to use the software. The team also set up the machine in-cab screens and made sure the data flow was accurate.

"As soon as the excavator bucket or clam shell bucket, goes under the water you can no longer see it, so you really don’t know what’s happening. We listen to the operators during setup and if they say, ‘Yeah, I like that but I really need this’ then we’ll add that component. The end users are the guys in the seat all day, so we listen to what they have to say and we make sure the system fits their needs." Lou Nash – President of Measutronics Corporation, an integrator of Trimble Marine technology.

Trimble Marine Construction software was used on multiple tools across the project’s demolition work. Heavy equipment used included excavators, clam shell cranes, cutter head on a dredge and more. Regardless of the tool being used with the machine —buckets, pincers, shears, hammers, grapples, jackhammers—using the marine software and sonar equipment each had precise guidance, giving operators clarity and visibility to work.

Blake Yaffee, area manager for the demolition portion of the Tappan Zee Bridge Project, explains that his team started by using the system to establish a baseline of conditions in the river. This began with 3D point cloud data collection of submerged features via a survey vessel using sonar.

"We’re able to look at the structure beforehand and then take that imagery, evaluate and confirm elevations, quantities and conditions. We were able to deal with any items that might create issues in advance of even setting foot out or performing any actual work on the structure."

After a baseline was set, Tappan Zee Constructors then used TMC software and Teledyne SeaBat T20 high-resolution multibeam echosounder to create a plan for ‘breaking up’ the old bridge’s concrete structures into rubble, which could then be safely removed from the Hudson River bottom. Surface data was then provided to the various machine types for guidance in deconstructing the submerged structures. TMC software was also used to monitor and visualize deconstruction progress of submerged structures and bridge components. As deconstruction progressed to the removal phase, the survey vessel continually collected data and updated the existing 3D surface model, which was transferred in near real-time to the machine fleet to provide the operators with updated views.

"From our system, what the operator sees in the first phase is where the tool has been so that he’s getting proper coverage of the inner deconstruction process. Once he feels he has reached a certain level that they want to start removing the materials, the sonar comes in and maps out the debris so it’s able to track the tool as he’s doing a deconstruction and he’s able to provide guidance to the machines that have to remove the debris." Lou Nash, Measutronics

Andrew Teese, a machine operator with the Local 825 International Union of Operating Engineers in New York, says using Trimble’s positioning equipment has been a significant advancement compared to conventional ‘hunting and pecking’ required for this type of marine construction work. Using traditional methods, a crew would likely excavate in a grid-like pattern in the general location of the old pier, from 7 one end to the other. Instead, he was able to use the Trimble system on a Manitowoc 999 crawler crane with a clamshell tool to clean up the bottom of the river where the old pier was dismantled. Using the TMC software and Teledyne, from inside his cab Teese can see precisely on the ground under the water where his boom point is compared to the terrain.

The software follows a ‘traffic light-like’ pattern, indicated in green on the operator’s control box when excavation is needed and changing colors to yellow as the operator gets closer to grade. The system provides updated information so as the structure is ‘broken up’ and moved under the water, the images and colors are updated in real time. On the screen, Trimble’s TMC software shows elevation, location, and a real-time 3D view. Operators can rotate these views so that the boom point is followed by the software, or they can leave the image itself and have the crane go in and out of the image. The software provides highly accurate locations and visualization, according to Teese. He has even been able to locate and remove football-size pieces of concrete, which would have been nearly impossible to spot without sonar capabilities. 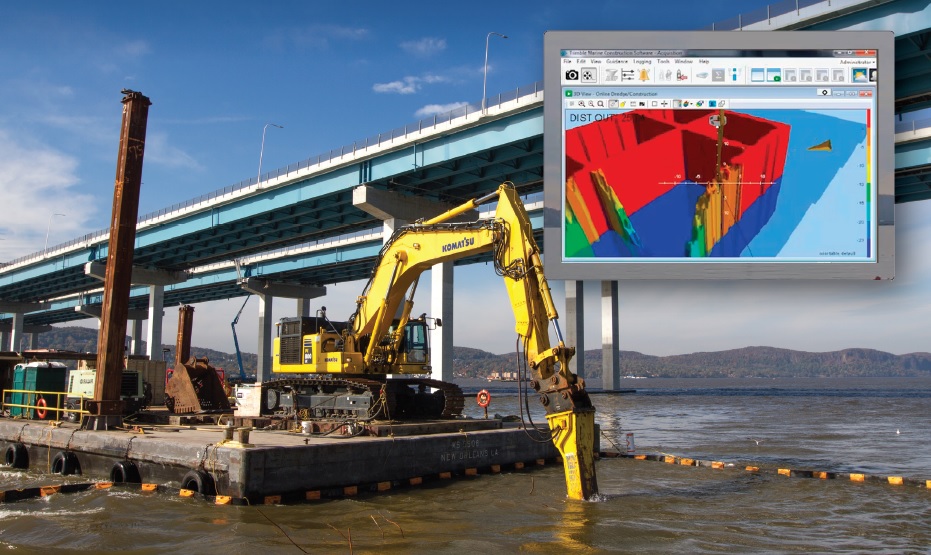 No more ‘working in the blind’

“I also have depth, I have the bucket position in two different views, which aided me in locating debris to be removed,” said Teese. “It gives me a precise location, kind of a ‘bird’s eye view’ and I can position my boom point wherever I want on the image and find whatever was previously scanned. It’s pretty accurate too.”

He explains the sonar picture greatly accelerated his work because he was able to understand what was going on underneath the water’s surface.

“It’s a lot faster because we can see where we have been, we can see how wide the material had spread and we can progress through the pier and the rubble pile with accuracy,” said Teese. “Things that you missed as you go through the area you can get a pinpoint location on, you don’t have to look around for things, you just know where everything is.” With pinpoint imagery, including overlayed reference points and coordinates real-time displays of the survey, the team then drew prisms around those ‘missing’ pieces of material and imported that data into operators’ control boxes.

“Anybody that has performed water demolition is very familiar with the term ‘working in the blind’ because that’s basically what people do,” said Yaffee. “For us, the investment in the systems against the scale of the project, together with the fact that the sonar and the software can be reconfigured and used on the next project, made it very easy for us to make the decision to bring this equipment on.

Focusing on safety and the environment

In addition to quickly identifying and removing debris underwater, precise positioning from TMC and Teledyne has helped Tappan Zee Constructors break up difficult components and material underwater, without relying solely on divers. Divers also have a more predictable and well-documented plan before they go underwater to work, which improves diver safety.

Scanning the river bottom, the team also identified eroded structures, components and materials that had collected over the years from the old bridge. Tappan Zee Constructors recorded these scans and was asked by the New York State Thruway to remove the material. As a result, the site will be returned to the state of New York in a more pristine condition then when they started work.

"Cutting steel piles with excavator mounted shears without either the support of a diver or spending a significant amount of time just feeling around is nearly impossible. With this level of visibility and positioning we are certainly able to review the conditions with the divers before they go under." Blake Yaffee – Area Manager of Tappan Zee Constructors

Yaffee believes that the Trimble system combined with sonar capabilities from Teledyne has also allowed the team to carefully evaluate and document the project progress. The tool’s real-time as-building capabilities provide daily insight into productivity and documentation that benchmarks were being met. Once tasks were completed, the team collected images of the area and identified any follow-on work that needed to be done.

“Now we have this multibeam, point cloud image that’s more than just a picture, it’s actual hard data and we’re able to say, Improved documentation and cost savings ‘this is the elevation of that point and this particular item,” said Yaffee. “I use it for evaluating different conditions when we’re either dealing with a subcontractor that we suspect didn’t finish their scope of work, or a condition that is outside of our scope of work with the owner and we need to prove it to them.”

Following this new marine workflow, Yaffee explains his team’s work has been safer, faster and more accurate. Not only that, but the extended team also can’t imagine going back to conventional methods.

"We no longer go through an evaluation process that we did initially to determine if it’s worth the investment, if there’s gonna be a return on investment of bringing this equipment on. In order words, it’s not going to make financial sense for us to have a piece of equipment out here that’s ‘blind’ while all the other pieces of equipment ‘have eyes’." Blake Yaffee, Tappan Zee Constructors

Get Construction Industry Insights Sent Directly to Your Inbox!

Success! Welcome to the community.